CinePlant is a Live Cinema performance that combines a living plant with a real time editing interface, creating a hybrid system – Veejaytable.

This hyperorganism integrates a living plant with electric circuits, digital video capture and programming. The database of images generated by the system feeds back constantly with the organic input of the plant.

This experiment is influenced by Cleve Backster’s pioneering research with Dracaenas, questioning the borders between kingdoms of life, or ultimately between living and nonliving.

It is known since antiquity due to its medicinal properties and it is also used in rituals in tropical Africa and the Americas still today. Some species, upon aging, produce a red sap known as “dragon blood” to which magical qualities are attributed. This “memory” of mythical networks activated by the Dracaena is recorded in a database of images, which are reprocessed by the plant and recombined with new images captured in real time. The reddish tone of the video projections is also a way of incorporating this imaginary within the circuit.

The leaves of the plant are connected by electrodes to a customized galvanometer – plantronic, which sends signals to an arduino microcontroler, which in turn is connected to an OSC network. A camera installed in the vase of the plant supplies de network with images that are stored for future mixes, thus updating the system “memory”.

The processed images are viewed by means of a mapped projection onto the leaves of the plant – planta_pantalla.

The organic variations produced by the plant in its interaction with the projection light, the audience and the surrounding environment are converted into new data in the network, directly affecting the editing: cuts, speed, filters.

The videoclips thus generated are like cells that compose a bank of images. These images are reprocessed as a result of the sensitivity reactions of the plant’s leaves to the projection. This photo-synthesis process draws on concepts of soviet dialectical montage of Sergei Eisenstein and Dziga Vertov’s kinoglass.

The work is presented as a 2 hour OpenLab session, and involves the real time assembling of the hyperorganism, the computer programming and the video projection upon the leaves.

A LCD monitor connected to the computer running the system exhibits the interface – showing how it works is part of the proposal. The sound produced by the hybridization process is amplified by a small PA system. 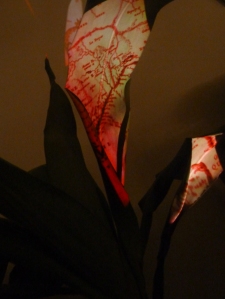 In this context we propose to discuss the limits between human and nonhuman intelligences, sensitivities and aesthetics, questioning the frontiers between nature, culture, art and science.

CinePlant is developed as part of research in Experimental Hybridization in Art and Technology at laboratorial nucleus NANO –EBA/UFRJ – Brazil. 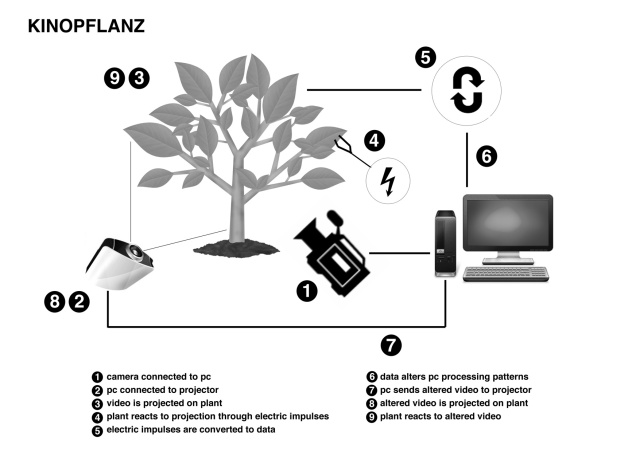